What is it Like to have a Duck as a pet?

What nobody tells you when you find yourself with a duck as a pet, is unlike cats, dogs, and even chickens and rabbits, there are almost no instruction manuals, helpful hint videos, or even how to sites (of any use) on how to raise a duck.  So what is it like to have a pet duck?

A bit of background, if you are new to Pumpjack & Piddlewick and are new to our animal antics. We started by taking care of 3 rabbits, 3 chickens, a cockerel, and a duck as part of looking after a Chateau. The number of ducks has varied since then, starting with 1 and getting up to 19! Births, giving away and sadly birds of prey are the main reason the numbers change.

Our life with a duck as a pet began when the female ducks we were looking after took to laying eggs and nesting – in various parts of the garden. One of the females was taken by a fox, leaving her eggs abandoned. We were going to chuck the eggs, but found one pipped, took it home and hatched it, with the result being… Maggie. And it as been wonderful chaos ever since.

A Duck as a Pet

First and foremost, ducks are very demanding. The one bit of information you do find, over and over again, is think twice about having a duck as a pet. They require a lot of attention. A lot.

Ducklings imprint on the first thing (person, dog, duck, etc.) they see, seeing that being as its protector. Over the first 24 hours you have to decide what to do about this.  When we were hatching Maggie, we thought we would be putting her with the other ducklings, that were about a week old. However, within those 24 hours, those other ducklings were all lost to predators.

Since it had taken us almost 48 hours to hatch Maggie, and it was my birthday, we were rather reticent to then put her down with the other ducks and potentially lose her too. So the decision was made to have a duck as a pet.

The first few couple of weeks were very easy, mainly because she was so small she practically fit in our pockets. In particular she liked to snuggle into my scarf, which became a habitual accessory for me. (Thank goodness it wasn’t summer.)  As long as one of us was in sight, she was a happy little duck, wandering around trying to eat everything.

Panic would ensue if she couldn’t see us. This is ultimately the focus of imprinting. We were her protectors and when she couldn’t see us, she would panic which meant lots of calling out for us. Loudly, repeatedly, until we came to her ‘rescue’.

Watch where you step

Our biggest issue initially was not stepping on her. She would follow us around, wherever we went, literally underfoot. This is instinct, because in the duck world a duckling will hide under its mother in the the first couple weeks if frightened.

Although her running after us was very cute, it was also very obviously tiring for her since our steps were a lot bigger than hers. This was another reason I carried her around the first few weeks in my scarf.  She loved both being close to me, but also, I think, enjoyed having a birds eye view. She would stay there for hours and I would simply carry on with whatever I needed to do.

Ducks sleep at night. Thank goodness. Darkness meant time for bed, when all good ducks are snuggled up somewhere safe, away from predators. Watching our other outside ducks certainly helped in understanding what to do in some instances. (In other areas, all bets are off and we wre watching and learning as we went along.)

We would put the ducks, chickens and rabbits inside at night. In fact the chickens put themselves to bed. Both the ducks and chickens very obviously sleep, or at least stay quiet, through the night, awakening at dawn. And I mean dawn, first light, barely able to see dawn.

Our kitten, Gigi, arrived when Maggie was 2 weeks old. Getting Gigi had been planned and arranged a couple months previously, but that didn’t mean we had any idea of how the two would interact. We simply had hopes that as they were both very young,and initially the same size, they would learn to live together. And, we would not leave them alone in the same room.

Raising the two as siblings is another story unto itself, and I will leave for another day, but I mention Gigi here as her arrival did impact on various ways we did or had to do things.

For Maggie’s first two weeks of life she slept in a wooden box, with lamp and blanket, in our lounge. This was placed by a heater for additional warmth, since she wasn’t able to sleep under us (without a rather squishy result). With the addition of Gigi, and her pouncing kitten curiosity, we had to change Maggie’s bed and room.

Maggie’s new bedroom became a wine box (had to be), which was draped with a blanket and kept by the bed (so I could make sure Gigi didn’t get inside). With their friendship deepening, Gigi took to sleeping curled on top or by the side.  As Maggie grew, so did the box until finally I gave in and purchased a cat carrier, complete with hinged door. Luxury.

With the new enclosed carrier, I was able to put Maggie to ‘bed’, in another room, as darkness came on. This worked well, as she would go straight to sleep, freeing me up for the first time in the evenings to do other things.

Getting bigger every day 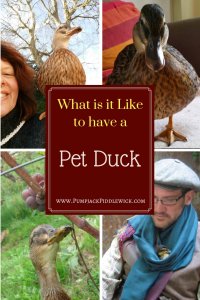 As Maggie got bigger, she didn’t fit so easily in a scarf. Also she was far more active and wouldn’t sit still as long. (And… she pooped more, but more on that important subject later.) So Maggie found herself down on the floor, more and more often.

She still followed me everywhere, inside and out, but with her getting bigger, and me walking slowly she didn’t have to tear along to keep up with me. I developed a granny gait, and we would waddle to work in the garden.

Maggie loved to taste everything, sincerely hoping it was something yummy to eat. We would waddle to meet new people, where Maggie would greet them by trying to eat their shoes, or even better if they wore sandals and had berry coloured painted toenails. A real treat. And we would waddle down to the other animals, where Maggie in particular liked to hang out with the rabbits (and could share their apples).

We never wanted Maggie to be confined solely to inside the house. The rabbits lived in a large outdoor enclosure, and I introduced Maggie into their world from the very beginning. It was safe to let her wander around in there with them and explore without having to keep a really close eye on her. It was a wonderful opportunity to catch up on letters to friends.

Maggie consequently enjoyed both the inside and the outside and it wasn’t long before we were able to leave the door to the cottage open and she wandered at will – well, wherever we did.

I did find one piece of worthwhile advice and that was to use a laundry basket to help cart your duck about. It was a fabulous idea! It actually gave me much more freedom.

I could leave her in the basket, where she could see me, and get on with work without having to worry about her wandering around, or getting under foot.  She came to love her basket and would happily sit and sleep in it for hours at a time.

Because Maggie couldn’t be left alone, we took her everywhere with us, to the garden, the supermarket, the vineyard… It simply became routine that she would be included in whatever we were doing that day.

Luckily Maggie loved to travel in cars. We would take her on journeys, like when we went to collect Gigi. She rode in my scarf the whole way, watching the scenery go by. When she got bigger, we put her in her basket on the front seat and, like a dog, she would stretch her head to watch out the window. She would stand like a little cowboy, watching everything pass by. We figured it must have felt a bit like flying to her.

And then… Maggie learned to fly.

Join us on Instagram, where you’ll find pictures and updates on Maggie, as well as our other our other ducks, and other animals.