We have discovered cobblestones in our courtyard. Actually, we knew there were cobblestones, we just hadn’t quite realised they were ‘COBBLESTONES!’.

You see our courtyard has gravel in it. And gravel is very, very annoying at times. Fine if it is outside, say, in the garden. But when it is next to a door, it invites itself in wholeheartedly. No matter how much we say nay, keep at bay, and sweep it back outside again.

It has always been our intention to get rid of the gravel and move it to the garden. We dithered on using it on our planned central path, but eventually after a couple glasses of dreaming and discussion wine, we decided being on the path was not really much better than the courtyard. Our garden is sloped, and we soon envisaged all the gravel inviting itself to the bottom of it.

And then there are the ducks, and other animals*. They don’t like to walk on gravel. So some thought had to go into where to put it which made the most amount of sense, eg. where we wanted the animals least. The patio!

Our patio is intended for entertaining. Sure our pets are still welcome, but it maybe nice to have an ‘adult’ space, where they don’t always join in with us.

We knew that under our courtyard gravel was cobblestones, which we adore. This was another incentive to get rid of those pesky little stones. Much easier under everyone’s feet if the stones are much, much larger. And smooth.

In clearing the gravel and carting it to make the patio, we discovered that we have two types of cobblestones. To one side, near the stable (duck’s bedroom) are what I would call the typical ones. Rectangular, about the size of a hand, kind you often see in old sections of cities. This type are actually, technically called setts.

But outside our back door and down the wide walkway between our neighbours extension and ours are a different sort of cobble all together. It is about double the size, generally square with a slightly rounded top. These we have discovered in researching are called cubes.

We can tell it is a very old extension by the stone carved windows, which made us wonder ‘how old are these cubes? Pretty darned old actually. In researching them, it turns out they are pre 1700s. Definitely somewhere between the 1300s and 1600s.

Cobblestones come for the word cob, which in the 15th century morphed into cobble to specifically refer to smooth rounded stones. The first ‘cobblestones’ were in fact stones smoothed by water. They were laid in sand, sometimes mortar, to make roads which were better suited to heavy traffic. After the 17th century cobbles are made in the rectangular way. Easier and quicker to produce, and designed specifically around horses hooves.

And then another thought struck us. We had found all these large trapezoidal stones in our garden (as part of Big Dig 1), carved with straight(ish) sides, with the larger side being slightly curved. And by large, I do mean hefty. Averaging about 25 cm (10 inches) across the top and also depth.

We started wondering if these stones were in fact the very old cobblestones in our courtyard. If so, they are truly a wonder. Each individually carved and smoothed on top. And being so large, their depth means they are and will always be amazingly solid.

We are still in the midst of clearing the courtyard to get to our cobblestones. They have been buried not only under the gravel but years of various mulch, and even in some places more modern day cement.

It is a laborious task stripping away all the layers to unearth the cobbles below. And as we do so we are discovering missing cubes. Why they are missing? Maybe drainage being put in? But the plan is to put these amazing stones back where they belong. 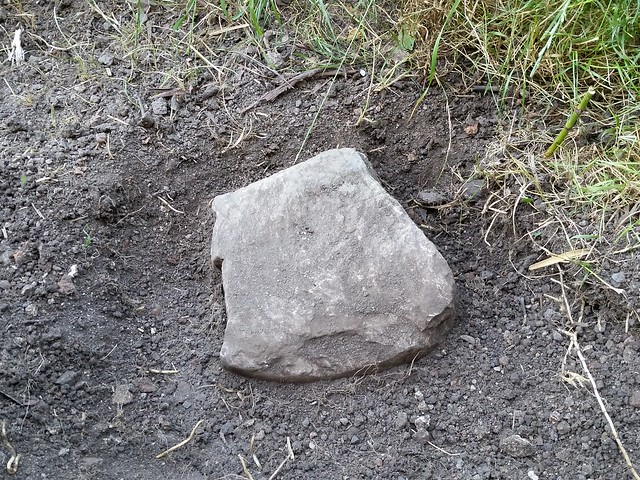 We are affiliated with AmazonUK, so where it makes sense we link to items there you may be interested in, especially books we recommend.

If you would like to read more about our Affiliates or how to be more involved with us, visit our Nourishing Pumpjack & Piddlewick page.