Summer work in the Vineyard – Tucking In

Summer in the vineyard is the time for ‘tucking in the vines’.  I love the picture these words  create. It always makes me think of tucking the vines in to bed for the night.  And, in a way, it is a bit like that.

As summer progresses the vines of course grow, and like most vines they can grow long and start to cling to everything and anything.  So the job in the vineyard becomes curtailing them and training them.

We do this the because the vines will struggle less, spend less energy in growing the vine and more energy in producing the fruit. Which in wine making, is fairly important I would say. 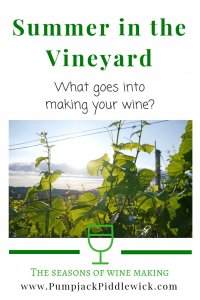 If you haven’t been in a vineyard, you have probably seen pictures, but either way I will bet you haven’t really noticed the wires. Neither had I, not really.  I noticed the vines, as you do. I vaguely noticed the wooden posts at the end of the rows, too. But really, for me, it was all about the grapes and the end result – wine. (Still is.)

Turns out there are 3 wires running along the row of vines. There is a low wire, about knee height, which is the one you train the vine along. (Read my previous post ‘Winter in the Vineyard‘ to understand how and why). This lower wire is attached to the posts dotted along the vine row. Then there are two side by side wires above that one. They run on either side of the posts and so create a gap in between them. They are not fixed to the post, rather they rest on a series of nails that are at varying heights up the post so you can raise these wires up as the vines grow. Are you with me so far?

The ‘tucking in’ part is where you take the lengthening vines and tuck them in between the gap of the two wires so that the vine points upward. The result looks almost like a hand, with the vines looking like fingers.

Having them go vertical gives space and air to the foliage and consequently the grapes. This, hopefully, means less chance of mildew and rot, more space for the grapes to grow and good shade for them during the heat of the mid day.

Time for a trim

Once the vines are vertical, we use clips (ours are shaped like the letter C) to pull the two wires together either side of the vine, keeping it in place. The vines are then all trimmed, rather like giving a haircut, to just a bit longer than the top wires.

We also tuck in and trim vines to be sure they are not touching the ground. Touching the ground is the easiest way for them to pick up mildew and transfer it to the whole of the vine.  Mildew is a danger in vineyards as it defoliates the vine. Without foliage the grapes will not be healthy and grow into a proper bunch fit for harvesting to make wine.

At the same time we also trim any additional shoots around the roots that have sprung up.  You don’t want extra shoots taking away the energy from the grape producing.

Vineyards in summer are hot places as there is no shade. Work usually starts very early, in the cool of the morning. I was always lucky as I normally finish about mid-day, since I had to still look after my shop. This is a luxury, as Pumpjack and those in other vineyards work through the whole day, no matter the heat.