Stereotypes and misconceptions about France

We manage a Facebook group about France and get asked regularly about stereotypes and misconceptions. There are truly a lot of outdated if not completely untrue myths about France and the French people. We have even encountered it ourselves in travel wise friends.

A while ago, we had people visit, visitors who generally travelled a lot but hadn’t been to France in years, and when they had been it was always to Paris. Visiting us was their first trip to the countryside of France. And they couldn’t get over the difference. They told us the French were helpful and friendly! It certainly showed me that even the most worldly can have misconceptions about a place.

There is a very real conception that the French (and note they are lumped together as one), and especially the Parisians, are not friendly. I personally think  this theory was generated by people who were not willing to try to speak even one, basic sentence in French, say ‘Parlez-vous anglais?’ (Do you speak English.) And it is native English speakers who are the worst at trying.

I saw with my own eyes, a number of years ago, when a young Australian woman I had met in Paris needed directions. She immediately went to a policeman she saw, and in her loudest English asked, “how do I get to the…?” Baffled, he shrugged, and replied “Je ne comprends pas l’anglais“. He did not understand English. She asked again… in English. Funny enough, his reply, with a tinge more impatience, was the same. Honestly, if someone approached you in your home country (assuming it isn’t France) and asked you something in French, what would your reaction be?

Since then I have noticed that more and more French people in fact speak even a little bit of English (as well as other languages). It’s all that EU togetherness and social media sharing, not to mention pop music, I am sure.

Where we live, in a small village, we have people wanting to practise with us whenever possible, whatever their level. However, that is not to say our conversations don’t at least start in French, and then when an opportunity opens itself they insert a word or phrase they know to assist the understanding or to simply take a chance at speaking an English word. 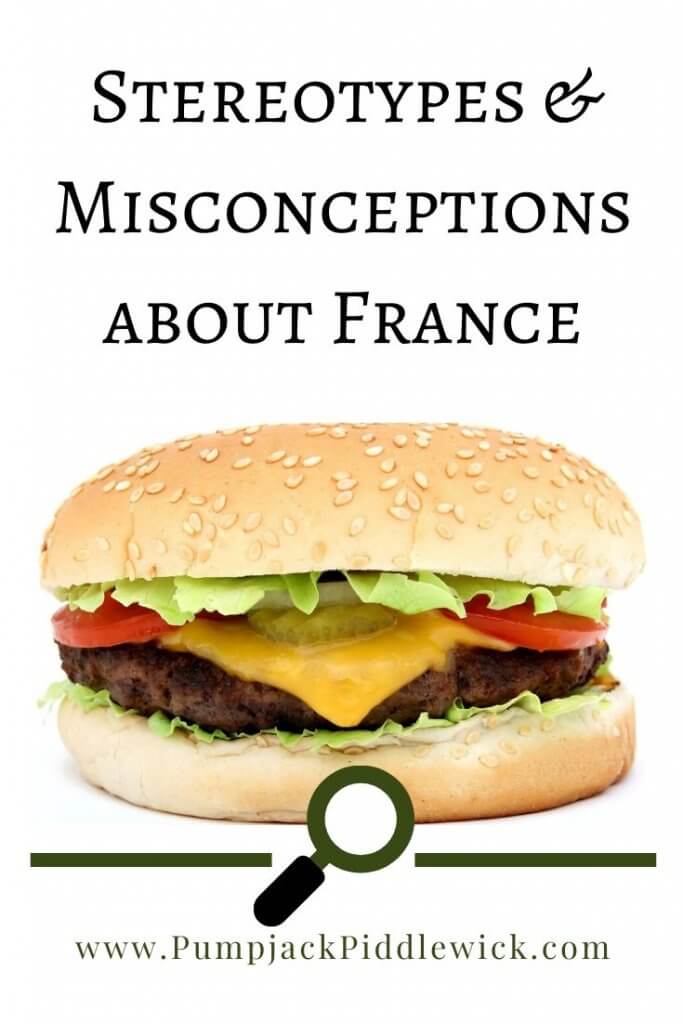 And it is not just the language that has stereotypes and misconceptions tied up in it. Here in the countryside not everyone is thin, nor dressed perfectly all the time. They are just, well, normal.

The French do love their food, quality over quantity as a general rule here.  However, they also offset this love of food, and the preparation that goes into it, with fast food. Goodness, do they love their fast foods! They are the second largest consumers of McDonalds after the Americans. Vraiment. Truly.

And then there is pizza. Our little village is spoiled for choice on what we’ve dubbed Pizza night, with a wood fired pizza making van and the boulangerie (bread shop) offering their rendition.  The difference here is that people simply just don’t consume large quantities. A pizza here is only one size. Generally about 30 cm or 12 inches, and is often shared between 2 or more.

Similar to any other country, there are differences between city life and country life. One is, dare I say, more refined or rigid, the latter more relaxed. But whichever one believes, what we have discovered is the French friendliness and willing to assist. A truly wonderful discovery.

Look lost in France and it won’t be long before someone approaches to offer assistance. Drop something along the way, it will have been picked up and put at eye view, wherever possible, should you retrace your steps to try and find it, even in Paris. Once you know this, you suddenly start to see the odd glove, hat, child’s toy, etc. dotted about on building ledges and fences everywhere.

The French like their privacy to the extent that almost all homes are enclosed with a fence and have a gated drive. In France, you arrange to meet, even if only a quick text minutes before, rather than simply turn up as a general rule.

However, when out and about, their curiosity knows no bounds. We really noticed it first when driving anywhere as everyone stared as we drove past. At first it made us paranoid that something was wrong with the car, or that maybe they could tell we were foreigners in their land. Then we learned to just ignore, and in fact sometimes give ourselves the freedom to stare at what makes us curious. Oo la la, we are starting to go native.

Go for a walk, or what’s known as a promenade and encounter someone else and you are expected at the least to say hello. If you know the person even a little, this extends into a ‘how are you’ and conversation. Going to the village boulangerie, or post office will never take only a minute. There will be the quick chats en-route, as everyone seems to be heading to the same place. Then further chat with those in line whilst waiting. Then those you encounter as you leave.

But don’t just take our word for it…

10 Myths about France and the French

Check in with our Fab Findings from France on Facebook, where we offer up and chat about new French findings, great things to do, fun facts and maybe the odd weird other thing. And we definitely set out to debunk many stereotypes and misconceptions.