I recently lost my garden virginity. There, I admit it. I have come to gardening late in life, but happily I can now boast that I have found a great and new passion.

In the past, I would have declared easily that I had a brown thumb. My mother has the most amazing green thumb, so I have always felt extremely disappointed that I didn’t inherit an iota of her talent.

I managed to kill (mostly through kindness, I hasten to add) every plant she ever gave me. Even the ones she said were impossible to kill.  However, that never meant I was willing to give up.

When we moved here to France it was winter. We looked after a ‘petite chateau’ that had a lovely garden, complete with gardener to take care of it (thank goodness). However, it also had a barely used, somewhat neglected, large, terraced vegetable garden.

I had always wanted a vegetable garden. They appeal to me more than floral gardens. It’s not that I don’t like flowers, I do, but more, I like foo. And the idea of creating a bounty one could eat is right up my strasse.

Getting stuck right in

Having been granted leeway to tackle the project, it was time to start taking after my mother. As a newby I couldn’t recognise much in the way of what was in the garden, except some broccoli, and had no idea what had been planted in the past.

I therefore determined that it was best to start from scratch. I would know what was going in, what things looked like (so I could potentially recognise weeds), and any mistakes made would be mine.

Help with Losing my Virginity 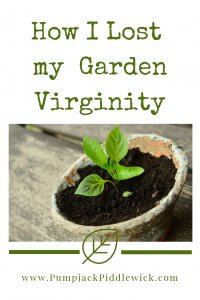 Like all good virgins (yes?) and wanting to know more, I started by buying a book. A great book. The Vegetable Gardener’s Bible* by Edward C. Smith.  It breaks down the veg into seperate pages, 1 veg per page, and has lots of lovely pictures and clear instructions. It became very well thumbed as the seasons progressed.

Then Pumpjack found the online Veg Garden Planner for me. A wonderful tool that helps you plan your garden out (in a format rather like playing with Colorforms, if you remember those), but online so easily managed. You set up the layout and choose the veg you are going to plant. You can even specify the specific details about which types. Then you drag your veg (colorform) on to your plan where you are going to plant it.

The planner can be looked at both as a map and as a growing schedule, with the schedule telling you when to do things, e.g. sow, plant, harvest. Both can be printed as well. It even helps with crop rotation, highlighting what not to plant where the next year. I love it!

So thus armed with some tools of knowledge, I began. I removed everything that wasn’t obvious or labelled, and then built raised beds. This was Pumpjack’s idea as it would save our knees and backs whilst giving more growing depth for the plants. I recycled old wood planks for most of the raised beds, but also used pruned branches to make a wattling raised bed (another Pumpjack idea and by far our favourite version).

There was an old compost pile we used to fill the beds as much as possible, along with some store bought earth to make up the difference.

As the garden is south facing with terraces, we wanted to utilise the walls as well, to maximise the growing spaces. We recycled pallets (given for free from our local hardware/bricolage) into Strawberry planters, as well as re-used plastic milk containers into hanging herb and lettuce pots.

What to Grow Where?

The choice of what to grow was daunting, and I wanted to try everything. A small part of me was curious to determine what would grow, and how easily, but the other more greedy side of me wanted to have lots of lovely veg produce at our fingertips.

Through February and March I planted seeds in recycled yogurt pots and tin cans (with drainage holes poked in the bottoms). These were to be found everywhere in our cottage, covering most surfaces. It wasn’t long before little seedlings were making their way into this world, some quicker than others.

As the plants grew I transplanted to larger pots and finally, come end of March and into April, they were planted outdoors. Some took, some did not. Those that failed I bought replacements.

One sage friend recommended that there were just certain plants it was easier, and potentially cheaper, to buy in rather than grow from seed. Leeks for example.

She also gave me two other pieces of great advice. First, stagger the plantings so we would have crops come into fruition over time thus giving us veg for a longer period of time. Second, if you plant, most of it will grow.

Everything was done by trial, and some error, but most of it joyously worked. By using my own common sense I think I managed to get away with quite a lot. Garden virginity now passée? Tick. Though, like anything I still have so much more to learn.

I took to listening to gardening programmes. I was in awe of how in depth people get into their gardens. But I realised something about myself. Sometimes too much research takes the fun out of things. I like the idea of keeping it simple. Plant it and see if it grows. If it does, eat it.

As we are affiliated with Amazon and they sell the fab The Vegetable Gardener’s Bible (which I still use to this day), I figured I would link it here. We’ll make a few pennies (and we do mean few) if you purchase from following our Amazon links. Using our links will not cost you anything – other than the cost of the actual item… if you buy it of course. And for that, you get a heart felt ‘Bon Appetit!’

(If you would like to read more about our Affiliates, visit our Nourishing Pumpjack & Piddlewick page.)