How (not?) to Build a Patio

Goodness, where has this month gone? I had promised myself by its end that we would build a patio, as well as, and in consequence, have removed/moved all our broken tiles. They are to be broken up and reused in their new homes of the patio base and our vegetable patch paths.

Like all good projects, they always take longer than you think. Now, I watch a great many restoration builds and grand designs and you think I would know better. But like those that participate in these shows, I too fall victim to my own hopes and dreams.

The theory behind our patio came about through accident, and necessity. Initially, we thought it had been a rock garden at the back of our barn. It wasn’t until we began Big Dig 1 that we realised it was all simply a huge spreading mound of rocks, slipped roof tiles and other assorted rubbish that had built up there over at least a decade. In fact, during the excavation I found many things that have made it in to our Shop. (1920s hand blown marbles seem to be the most popular amongst my customers.)

We also found a retaining wall. At least I think that is what it is. And in consequence it meant our patio area looked rather like a large bath tub or small swimming pool, as we had had to dig down so far to get everything out. It was nick-named Le Piscine (The Pool) in consequence by our neighbour and the name has stuck ever since.

Our back garden slopes from barn down to its end, so having a flat area means either digging in or building up. For the right side of (looking at) the barn, since it is already dug out, we decided rather than to back fill it in once cleared we would have a sunken patio.

The sitting, day dreaming over a glass of wine, plans are… immediately behind the barn, in the area behind the retaining wall, will house a large water collection tank. The guttering (not yet existent) for the barn will feed rain water into it. This tank will then flow, through piping, down along the garden wall to feed the plants and especially, the duck ponds. (More on that plan some day.)

Then beyond the tactfully hidden ugly tank, we have Le Piscine. A rectangular inset area with stone wall at top and left side and raised path on the right. At the other end we currently have our fire pit. A joy to sit at of a cool evening (and burn all the prunings not being put to other uses.)

The fire pit though will be replaced with a pizza oven, maybe this summer, maybe not. I have to say here that Pumpjack makes The Best Pizza. Ever. We are so in need of a pizza oven. So it is definitely on the sit and contemplate, day dreaming to do list.

In the meantime, it is time to make the patio. More or less. It has now been thoroughly cleared of all bits and bobs, weeds and what nots. It has been levelled so it slopes gently to one corner for rain flow. This flow extends around the current fire pit wannabe pizza oven and into the flower garden behind. Waste not and all that.

And thus we commence building up the patio base. Normally one would use gravel, then sand then paving stones or other such topping. But you see, we have this rather large pile of broken tiles. The trouble is, the internet, normally the font of all knowledge (and then some) has nothing on re-using broken clay roof tiles. Broken ceramic, sure, make a mosaic, but broken roof tiles – nada, rien, nothing. (Or let me know if you find something. Anything.)

Think about it, the removal of these tiles, and rocks and dirt, took over a year. The mind boggles, doesn’t it. There was so much to dig out we ended up mounding it up in 3 very large piles of tiles, rocks and dirt on the opposite side of the garden. Each of these mounds is over 1 meter/yard high and at least double in width. So what to do with them?

Our answer came from last year, when I had to move the pile of broken tiles because I had put them in the wrong place, that is, our eventual pizza oven location. Whilst moving, I took all the little pieces and put them down as a path around the asparagus garden and started a perimeter veg garden path. It turned out it worked well at keeping weeds at bay if it is about a hand width thick.

This month has been about getting rid of those piles. The stone pile is already dented as much of it went into building the stone dividing wall in the duck enclosure. The rest will be stacked lower down the garden for use in repairing the stone side wall where it has fallen down. The dirt pile is being saved for creating a leveller (is that a word?) grass lawn once the piles are gone. And the broken tiles…

I have a system of weeding out the various sizes. Tiny pieces go in a bucket to haul down to the veg garden paths, now being dug out as well in preparation, resulting in lots of worm hunting breaks. It’s a slow job sometimes.

Straight edged pieces are being saved for bordering those paths. And everything else gets taken over to the patio area where it is, very satisfactorily, hit with the back side of an axe to form small pieces. These are then piled, hand width thick into a ‘gravel’ layer.

The gavel layer is almost complete. Another day or two. Then sand will be put down to cover it and infiltrate the pieces creating a solid base. Eventually a top layer will go down.

It is intended to re-use the large flag stones in Pumpjack’s workshop as this does not make a good flooring for wood working and such. But as this will require replacing, which involves a whole heap of other changes in the barn, it may take awhile. In the meantime we will see how we get on with the sand as is. Or maybe another option will show itself. 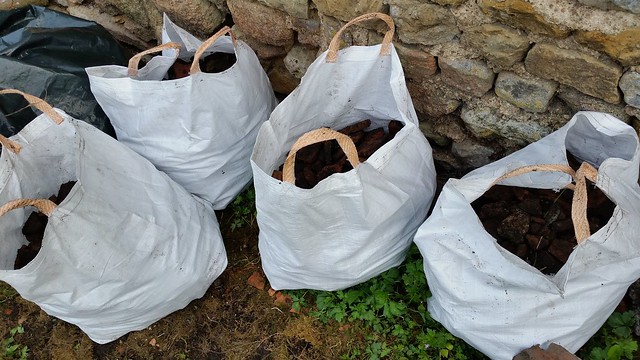