A Peek Behind French Shutters

France has a love affair with shutters. And now that I am ‘in the know’ about these window dressings, I have gone native. I have joined our village in opening and closing these things daily. Actually, main times daily.

If you have never been to France, typically, when you come into a French village on a summer afternoon, you will invariably find the town looking like it is locked up tight. All shutters will be closed.

I have heard people comment on the deserted feeling of French villages, particularly at mid-day. There is method in this madness. The shutters in France serve a real purpose. They are not just for decoration.

I learned about shutters and their uses when living in Spain. Although we were in a northern village, at the foothills of the Pyrenees, the temperatures were extreme. During the summer we averaged 40 degrees C (104 F). It was a dry desert climate but still you sweated sitting still.

People ate their biggest meal at lunch time, as cooking was easiest in the mornings relative coolness in comparison. I truly understood why people siesta’d. It was too hot to do anything else in the strong heat of the afternoon. By 10pm there was a slight cooling and suddenly there was activity on the streets. Children played and people gathered at the local cafes and bars until well past midnight. The heat definitely dictated the day.

Method in the Madness

Our apartment in Spain faced east to west, with windows looking out both ends. We had interior shutters that came down over all the windows. At first I could not understand why everyone had shutters, but I was soon taught how helpful they are. They keep the coolness in and the heat out, if done properly. The same holds true in France, though maybe not such extreme temperatures (at least where we live).

The nights are for opening windows, letting in the cooler evening air. Shutters are closed for privacy, to mute noise, yet to still allow air to circulate the home. Come early morning, the shutters are opened and the sunshine is let in to air the home. 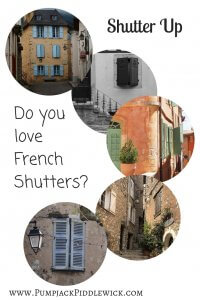 I open our back windows in the morning to let the early morning sun and air in, and the duvet* gets hung out the window. In French villages you will typically see duvets hanging out windows on sunny days. In fact, all our windows have a bar in place about 1/3 of the way up the window frame. Contrary to what I original thought, that it was a safety feature, I soon discovered it is there for throwing your duvet over to air it. At about 10am the duvet comes in and windows are shut to keep the cooler fresh air in and the heat out.

The front windows get the sun mid afternoon, so the shutters and French doors are opened in the morning. As these face the shaded street the air is lovely and cool here early on. By mid-day it’s time to close the windows to trap the cool air in. By mid-afternoon the shutters will be closed so the sun shining in doesn’t heat up the inside of the house.

Come evening, after dark when the nights are cooling down, the windows are opened once again. And so the cycle begins again. And my goodness what a difference it makes! Well worth all the opening and closing.

But what about autumn and winter you ask? Do we still continue opening and closing shutters? Mais, oui. But, of course. Now the difference is instead of keeping the heat out we are working to keep it in. It’s the same process, but in reverse.

Windows might open in the morning for less time, as it is all about keeping heat in, but they will still open on a sunny day to get the fresh air and sunshine in, and give the duvet its airing. Shutters may stay open and windows shut during the day when the sun is shining in. Shutters are generally kept closed on a particularly cold or not sunny day, acting as additional insulation.

Shutters are generally made of wood, but sometimes metal. In France, they have angled downward slats (louvred) so air can flow through but sun can’t get in. Some of the more fancy metal ones you can open multiple ways; concertina like or even awning like, where the whole unit opens at the bottom whilst staying attached at the top.

I know some are going to think, but what about those who work away from home? It’s still part of the routine. Simply, the shutters and windows may be opened and shut for a quick airing before work. Then windows and shutters are then shut tight (also bonus of added security) whilst away. They are opened again in the evening.

And that is why, if you visit France, you may find villages that look deserted, shut up tight against the weather, whether heat or cold. It’s all in the timing.

If you like our little findings on France, you can read more in our French Findings:

*A duvet, if you are unfamiliar with the word, is a type of bedding consisting of a soft flat bag filled with down, feathers, wool, silk or a synthetic alternative, and typically protected with a removable cover. It is the most common type of bed covering in Europe.