I have been working hard on a blog post about how to save money or clear debt by living on 50 (£ $ €) a week but I was derailed. I had to make not one, but two trips to Paris this week, and since it is only Wednesday, that means 3/4 of my week thus far has been spent away from home. I am getting in my excuses now as it is not yet ready to publish (you can read my post on living frugally next week), and consequently this week I am now writing about cars. Makes a lot of sense doesn’t it?

In both my drives from the countryside to Paris I became very, very aware of the lack of cars. I went on the Peage, the toll road, and honestly it was a dream. There are so few cars on it that you can put your car into cruise control and just coast along, changing lanes around the odd truck, with zero stress or hand gestures. Worth every penny.

Driving in France is just lovely. France has very little population for its size so one expects the countryside to be a little empty of people, and consequently vehicles. What I hadn’t expected was to find Paris to be similar. I have driven in a few large cities, New York, Boston, London, Manchester, Barcelona and Amsterdam to name a few and all of them have ended up with clenching the wheel, going the wrong way (a few times), shouting, I mean debating, with my passenger on the best way to get where ever we are trying to get to. Not Paris. 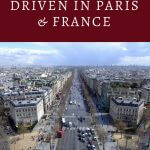 Ok, I ran into a bit of traffic as I merged down from 3 lanes (here that Los Angeles, 3 lanes!) into 2 as we entered the city. Even once in the city there was still space and the ability to simply drive. Yes, there can be some confusion, but on the whole the traffic moves slowly, so you have time to think about where you wish to go (and it helped that I wasn’t in a hurry). And directions to places are well signposted so there is little panic. One encounters traffic lights to slow the journey, but that simply gave me the opportunity to look at and admire the lovely buildings of the city.

Thus far, Paris goes down as my favourite city to drive in. Though personally, I hope next time I will take the train. That’s even better.

This site contains some affiliate links. To read our full Join in & Nourishment disclosure, click here

2017-03-15
Previous Post: Bon Livre – Blackberry Wine by Joanne Harris (Any book about wine is a friend of mine)
Next Post: Mucky Cluckers ~ Read a lovely book about backyard chickens