Building a trellis tunnel was added to the garden plans this past autumn. Whilst sitting in the duck enclosure, envisioning Cafe du Canard, and looking at the dug up stone walling it seemed to make sense to plan something in this area.

It is the sunniest corner of the enclosure. Lovely in autumn and winter, but not so hot, or rather too hot, in summer. The earth bakes hard and the area can’t be used by plant or animal. So something was needed to create shade, but only in those summer months.

First we tried sunflowers. They looked fabulous and grew large, creating some shade, but only some. We needed something more. The line created by the discovered stones seemed to foretell of a path. The idea of a curved trellis was born, or actually several trellises, creating a trellis tunnel to shade the whole path.

It should work well. Even though it’s a hot spot in summer. The duck pond naturally empties into this area when we change the water, so watering the plants regularly would be easy. And that’s the hard part in a sunny corner. The choice then became, what to grow.

We needed something that climbed. And it was whilst clearing last years veg patch we hit on… beans. You see beans, whether haricot verte, broad/runner beans or mange tout, are our favourite veg. And next to tomatoes, you simply can’t compare the flavour of beans from the garden to those in the shops. Truly scrumptious.

Beans are normally planted, if from seed, in May here. It was planned to buy the trellis’s in April and get the area ready. And then ‘lockdown’ or, as they say here in France, ‘confinement’ occurred. Like our raised bed plan, it was all change. We would have to make due and work out how to be inventive with what we already have.

Searching in our barn showed up a collection of metal posts from an old demolished trampoline (from our Chateau caretaker days, when the trampoline broke after a -very strong!- wind blew it down the garden). About a meter/yard and a half in length they were a little too short for a trellis tunnel. But they could be a base for something. They were tubes. Something could be put in them. Something bendy.

Having used hazelnut branches for wattling fences before, we knew just the sort of bendy branch that just might work. There are 3 hazelnut trees along the path beyond the back of our property that need copsing. Badly. I mean, they haven’t been trimmed or taken care of in at least 30 years. So we would be doing them a favour of ridding them of some branches. Win win.

The metal tubes were pounded into the soil about a meter/yard apart, and either side of the path. The branches slotted into the tubes and were then duly bent over to slot into another tube on the other side. Some went across, others went across at an angle. It depended on the length of the branch. (This is called going with the flow.)

What I hadn’t taken into account was the bird netting overhead. Merde. The branches kept getting tangled up in it, tearing holes, and even taking down whole sections. Merde, merde, merde.

With the curved branches in place we now had what looked like a trellis tunnel. Not perfect as some branches bent better than others. More a rustic sort of attempt. But functional. And that is what counts.

More branches were attached going side ways to aid the plants growing upwards, with something to cling to as they climbed. And finally a few twigs were put in vertically, about 30cm/10 inches apart. Again to aid in climbing, but also to mark where the beans would be planted.

And did I practice patience and wait until May to plant my beans? Did I heck. We have a lot of bean seeds so I figured it was worth a punt. I would try planting them now and simply wait and see if any come up. More can always be planted in May if they don’t. (Patience is a varied virtue in our household.)

Oh, and maybe plant some melon seeds. And, a Wisteria.

I am currently growing Wisteria from seed (from a neighbours seed pods). So far 4 have sprouted. Two are earmarked for the sunny corners of the duck enclosure. The hope is they grow up and then along the outside, and help support the chicken wire.

One will eventually be put at the Cafe du Canard end of the trellis tunnel, to grow up and over the first trellis with a look towards permanence. A little constance through the seasons. We are foreseeing gorgeous hanging flowers and wafting fragrance through the cafe and enclosure. It will be a delightful additional ambience to our morning cup of coffee, or evening glass of wine, in years to come. 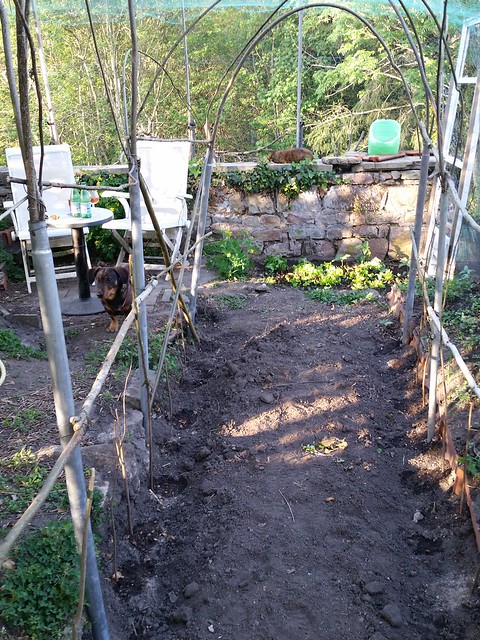 Gardener Gifts from Our Shop